Home / News & Insights / Safety Week 2022: You Bet Your Life When You Gamble With Safety

Safety Week 2022: You Bet Your Life When You Gamble With Safety

Haskell returns to visit with Safety Advocates Russ and Laurel Youngstrom, who in 2019 told us the story of how an accident changed their lives.

In 2019, Haskell partnered with Safety Advocates Russ and Laurel Youngstrom to create a Safety Orientation video emphasizing the gravity of one careless act and how it affected every aspect of the couple’s lives. This year, we checked in with the Youngstoms and heard firsthand from Russ, who now suffers from paraplegia, why safety matters.

The injury Russ suffered was his fault. A brash 30-year-old commercial painter, he was working 30 feet above the ground and not following proper safety protocols. An accident caused him to fall.

“When I was laying there and they were cutting my clothes off of me, one of the medics leaned over to me and asked me why I wasn’t tied off,” he said. “I didn’t realize until later that I landed about a foot away from my safety line.”

An MRI revealed that his back was broken in three places, and his spinal cord was severed.

“He said, ‘They say I’m paralyzed and I’ll spend the rest of my life in a wheelchair,’” Laurel recalled. “I thought he was joking. That’s what attracted me to him in the first place was his sense of humor.”

He wasn’t joking then, and when Haskell visited with him last month, he issued a deadly serious warning.

“Again, for the workers out there, this rips you apart – mentally, physically, family-wise,” he said. “It’s not worth it.” A deeply rooted culture of safety connects Haskell’s team members. That culture and care for one another led to unprecedented... The theme of Construction Safety Week 2022 is “Connected. Supported. Safe.,” and Haskell brought together leaders with... Each year, Safety Week a is time when Haskell reinforces and celebrates the essential role that safety serves in its culture... In 2020, Haskell posted a record 6.1 million Work-in-Place manhours in the execution of our projects around the globe.... When people think of health, they think of physical health, like back pain or a knee sprain. But as Stronger Than Stigma Founder... 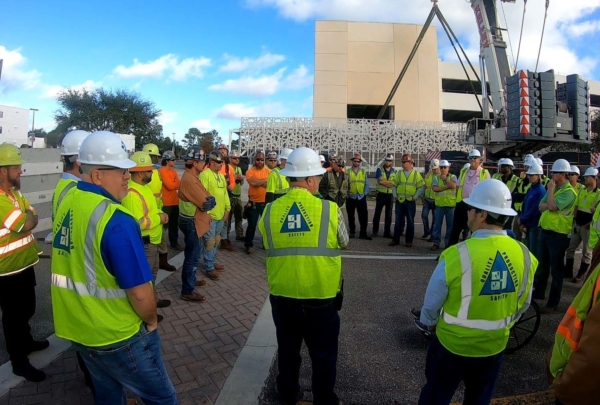 Be present. Be focused. Be safe. That is the theme of Construction Safety Week 2021, and it’s a good one. It’s particularly... Safety is one of Haskell’s core operating principles, and numerous internal programs empower our commitment to a zero-injury,... Each year, Haskell recognizes Safety Week as an opportunity to reinforce the essential role safety serves in our shared... Together, We Are Building a Stronger, Safer Industry

Each year, Haskell recognizes Safety Week as an opportunity to reinforce the essential role safety serves in our shared...

Despite permitting snags, weather delays and supply-chain challenges, Haskell completed the American Leadership Academy career and academic high school in Mesa, Arizona, on time so that it could welcome students as scheduled on the first day of classes. https://www.haskell.com/insights/design-build-team-overcomes-delays-in-time-for-first-day-of-school/