The packaging engineer crafted for herself a role to ensure Haskell's Manufacturing Solutions team scales up its knowledge base along with its projects.

In the past, a typical project for Haskell’s process or packaging engineering teams involved adding one or two manufacturing lines to a new or existing facility. These days, Haskell is just as likely to be asked to perform a turnkey project, constructing a greenfield production facility and installing five new manufacturing lines.

These megaprojects mean vastly more work and vastly more people to support it. So, how does Haskell ensure that new hires have the right skills? And how does it impart to existing team members the valuable technical knowledge needed to carry out these huge projects at its exacting standards of safety and quality?

The answer, according to Senior Packaging Systems Integrator Ginna Pratt, is an intentional and standardized approach to quality and training for the newly formed Manufacturing Solutions Group. Specifically, it requires a dedicated Quality & Training Manager.

Pratt sold her idea to her supervisors, who agreed it would help the company evolve. An all-encompassing quality and training plan is now in progress. Along the way, Pratt is creating a job that allows her to draw on her considerable engineering experience and indulge her passion for quality and training.

“My goal as the new Quality and Training Manager for Manufacturing Solutions,” Pratt said, “is to drive quality on projects by ensuring all our team members have the technical knowledge they need to do their jobs effectively, efficiently, and confidently.”

From Farm to STEM

Pratt joined Haskell in 2014, coming directly from Georgia Tech, where she studied Mechanical Engineering. She is a native of Athens, Georgia, where her parents are accountants and run a small sheep farm, and she said her upbringing acquainted her with problem-solving at an early age.

“We did all kinds of stuff on the farm, and that got the wheels turning for me,” she said. “When I started to think about what I would do when I left school, I knew I didn’t want a job that I might find boring. I wanted something hands-on.”

Even so, her engineering career almost didn’t happen.

Despite having been accepted by Georgia Tech, she decided to go to the University of Georgia to study Fine Arts instead because, admittedly, she feared that a technical degree would be too difficult. But deep down, she knew Fine Arts wasn’t the right path, and after attending orientation classes and signing up for housing at UGA, she summoned the courage to make a phone call launched her engineering career.

“I called Georgia Tech and asked, ‘Will you please still take me?’ Luckily, they did, and throughout my time there I realized this is where I needed to be.”

Pratt’s career choice was spot-on. She loves her job, and her supervisor, Bela Jacobson, Haskell Vice President of Packaging Operations, was lavish with praise.

“Everyone loves Ginna,” Jacobson said. “She’s a high-potential employee and everyone wants her on their team.”

The new role was very much Pratt’s idea. She saw that Packaging was outgrowing its training capacity. Not only was the department expanding quickly, creation of the new Manufacturing Solutions Group through the merger of Packaging and Process teams was bringing about new roles and protocols.

Pratt admits that the email she wrote suggesting the creation of a Training and Quality position sat in her drafts folder for weeks. Eventually, she sent it to Jacobson and Keith Perkey, Vice President of Manufacturing Solutions.

“They were very receptive to the idea,” she says. “They both saw the need for the role and actively encouraged me to go for it.”

Creating the Best Job of Her Life

Pratt’s change in direction is a great example of how Haskell gives team members across the organization every opportunity to create their ideal career. The company operates with the direction of six strategic pillars, the first of which is to “Provide Team Members the BEST Job of Their Lives.”

“If someone on my team has a unique skill set, I’m willing to work with them to create a new role that would accommodate those skills and still benefit the team,” Jacobson said.

Pratt said the concept for her new role grew out of the idea that high-quality service follows high-quality training. Haskell is very much a service-oriented company, and when team members are confident in their technical skills and fully prepared to carry on highly intelligent conversations with customers, vendors and subcontractors, best-in-class design naturally follows.

“And then we just need to make sure that we’re following our quality best practices,” she said. “But it all starts with making sure we have a solid training plan and an intentional approach to training.”

The training plan Pratt is developing doesn’t have to be written from scratch. Haskell’s manufacturing disciplines have generated volumes of remarkable content dating back more than a decade, and she will organize and supplement those building blocks to create seamless curricula.

“There’s a lot of material that people just don’t know about,” she said. “Right now, our engineers need to sort through 800 pages of documentation and 27 hours of video in order to find the one thing they need.”

Jacobson agreed that access to informative and well-curated training material at the right time was vital to delivering a project in the Haskell way. Such education and preparation mitigate risk and best leverage team members’ talents.

Pratt said she expected the training plan would take her three or four months to compile. The initial focus will be on entry-level engineers, since they tend to need the most support, but it will continue to grow with the goal of making it all-encompassing.

Best-in-Class Solutions on an Ever-growing Scale

Jacobson is certain Pratt will excel in her new role, describing her as patient, able to clearly explain complicated concepts and experienced in mentoring younger engineers and interns. And of course, she has a passion for training, quality and making sure that the entire team has the necessary skillsets.

“If Manufacturing Solutions is going to continue growing and being successful, it has to standardize what it’s doing,” Jacobson said. “Ginna’s role will help us do that, and I think she’s going to be highly successful.”

As for Pratt, she’s excited to get started.

“It’s just me leading this right now within Manufacturing Solutions, but there are a lot of people helping and interested in creating training content,” she said. “Bela and Keith are sending lots of folks my way, so I have a long to-do list. This is just the beginning!”

About Engineers Week: Founded by the National Society of Professional Engineers (NSPE) in 1951, Engineers Week is devoted to “ensuring a diverse and well-educated future engineering workforce by increasing understanding of and interest in engineering and technology careers.” This year’s theme, Reimagining the Possible, recognizes how engineers create new possibilities from green buildings to fuel-efficient cars to life-saving vaccines.

Haskell is hiring! Join an organization where every team member is supported to grow and progress throughout their career. 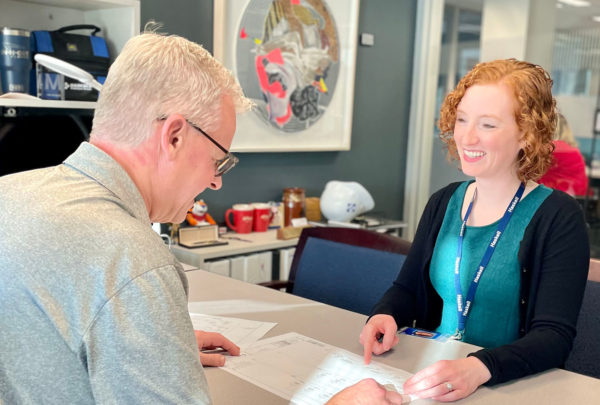