Recognizing the values and traits that military veterans bring, Haskell worked with him to find his place as an estimator on the preconstruction team.

For as long as he can remember, Haskell Estimator Robert “Bobby” Broadhurst dreamed of serving in the military. Broadhurst, 30, grew up in St. Louis, surrounded by men of great character — his grandfathers — both of whom were U.S. Navy veterans.

Their influence inspired Broadhurst to attend the U.S. Naval Academy in Annapolis, Maryland.

“My choice was a desire to be a part of something bigger than myself,” Broadhurst said. “I saw the influence of my grandfathers and wanted to follow in their footsteps.

Broadhurst graduated in 2013 with a Bachelor of Science degree, specializing in ocean engineering.

After graduation, he and his wife, Catherine, moved to San Diego, where Broadhurst served on the USS Bunker Hill (CG-52). In 2015, he did a 10-month deployment in the Middle East as a gunnery officer.

“The naval academy does a really good job of helping you grow up,” he said. “The experiences you deal with are life and death. To be young with big responsibilities on your shoulders, it prepares you for the gravity of what you will deal with on a day-to-day basis.”

Broadhurst served an additional deployment in 2016, this time to the Western Pacific, seeing countries such as China, Japan and Australia aboard the U.S.S. Spruance (DDG-111) as an anti-submarine warfare officer.

“A couple times out at sea, I was at the furthest point from land on Earth,” he said. “Across the Pacific, you see a lot of beautiful things. There are really tough days, but it’s definitely worth it. The friends you make and experiences you have, it prepares you for a lot of things.”

After serving two successful deployments, and with two children, Arthur and Franklin, now part of the picture, Broadhurst decided to end his service to the Navy as a Lieutenant and move back to St. Louis with his family.

“The best choice for our family was to end my time in the Navy, which was the same thing my grandfathers did to spend more time with family,” said Broadhurst.

Re-entering the workforce as a civilian came with challenges.

“Everyone wants to hire a veteran, but it’s hard to quantify what we do in the day-to day-world,” Broadhurst said.

Thankfully, an opportunity presented itself in the construction industry with Haskell.

Broadhurst connected with Tom Corrigan, a Director of Construction in Haskell’s Consumer Packaged Goods Group in the St. Louis office. Corrigan is a fellow veteran and someone who has worked with Naval Academy graduates in the past. He looked beyond Broadhurst’s resume and examined his broader life experience.

“Haskell truly talks to you and understands the experiences you have had,” Broadhurst said. “They were able to say, ‘We know you can handle this job and be a part of this team.’ They were able to give me that security and a job offer. It put me on the right foot as a civilian.”

Broadhurst joined the Haskell family three years ago as an assistant project manager (APM) and later transitioned into pre-construction with the estimating team.

“Haskell wants you to succeed and grow. When I realized I didn’t want to be an APM, the approach was always, ‘Let’s see where you fit.’ They really care about the employees.”

The team culture at Haskell is reminiscent of what Broadhurst felt as a naval officer.

“We look out for each other, just like we did on the ship. It’s a true team environment. [Haskell] is willing to bend over backwards for you,” he said.

Broadhurst recognizes the importance of Veterans Day and is mindful that it is not confused with Memorial Day, which is observed on May 30, to remember those who died in active military service.

“I appreciate people thanking me and saying kind words,” he said. “It means a lot, and I'm very proud of it, but I think most veterans would like to shine the light on those that don’t get to come home. Those that died never got to be veterans. It’s important to acknowledge that and to always remember.” 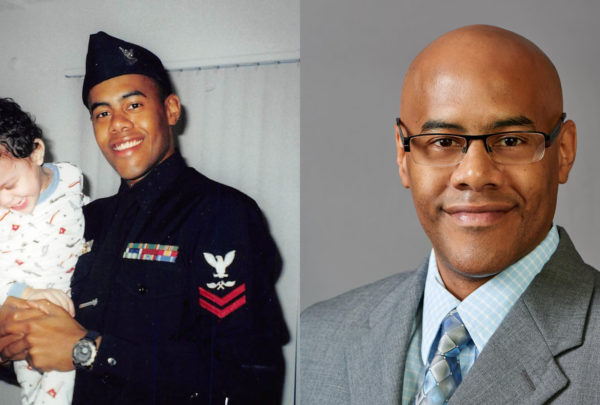