A confluence of events three years earlier led to the U.S. Coast Guard in September 2021 choosing Haskell as the design-build partner for the Fort Macon Hurricane Rebuild Project at Atlantic Beach, North Carolina.

First, of course, was Hurricane Florence, which struck Coast Guard Station Fort Macon and the Outer Banks as a slow-moving Category 1 storm, bringing wind damage and widespread flooding because of a powerful storm surge and torrential rains.

Lastly, Haskell had local knowledge of the facility and a relationship with its personnel, and vice versa, because it had just completed a project at Sector Field Office Fort Macon that included waterfront work and building construction.

“Under the MACC program, we've done projects all over the country, including in Hawaii,” said Joshua Hodge,” Director of Project Development in Haskell’s Federal Division. “It’s really helped us establish a good relationship with the Coast Guard.”

The Fort Macon Hurricane Rebuild Project will consolidate facilities at Sector Field Office Fort Macon. Specifically, the project comprises design and construction of a Multi-Mission Station Facility that includes a 29,000-square-foot three-story building that will house an office space, a boat maintenance bay, sleeping quarters, fitness center, and medical/dental space. The project also includes utility upgrades and demolition of four buildings that were damaged by the hurricane.

Working closely with the Coast Guard team, Haskell has completed all design, and a groundbreaking ceremony took place July 21, 2022.

“Haskell has been an excellent partner, and they have a world-class reputation,” said Captain John Berry, commanding officer of the Facilities Design and Construction Center (FDCC). “So, we’re very excited to be working alongside them on this great project.”

Atlanta-based subcontract partner Coreslab Structures also has played a role in the design phase, and the facility will be constructed using precast concrete for increased hurricane resistance. The task order required that the building be designed for progressive collapse, which ensures that, if one part of the structure is compromised, others will remain standing.

“That is unique from a design perspective,” Hodge said. “That requirement is part of anti-terrorism force protection measures. But since it’s structurally designed for that, it will be much more resilient in a hurricane, as well. It’s kind of a two birds, one stone kind of situation.”

The project is on track to comply with a contractual completion date of January 1, 2024.

“We are proud of our opportunity to support the Coast Guard’s mission and enhance their ability to ensure safety, environmental protection and national defense,” Hodge said.

Haskell proudly serves those who serve our nation. Explore an extensive range of integrated design and construction capabilities. Modeling and Simulation are Vital to the Best Manufacturing Solutions 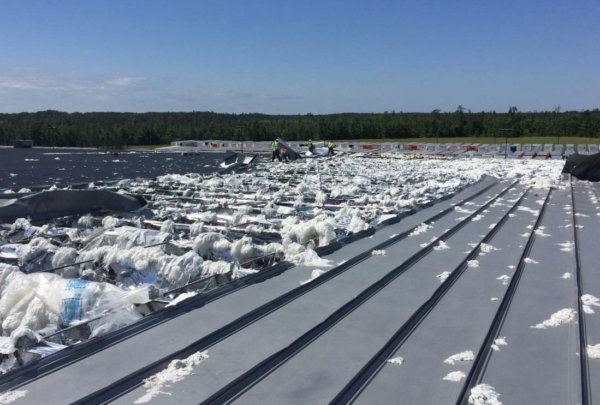